Paddling is used in high schools as a way to teach a young lady a lesson for inappropriate behavior that she has engaged in.  There are many variables that can make a paddling effective, but the main goal is the application of pain.  A successful paddling will involve as much pain as possible both during and after the paddling.  Assuming that a large and heavy paddle is used, and that each swat is applied with maximum force, let’s look at a way that a school paddling can be applied in the most successful way. 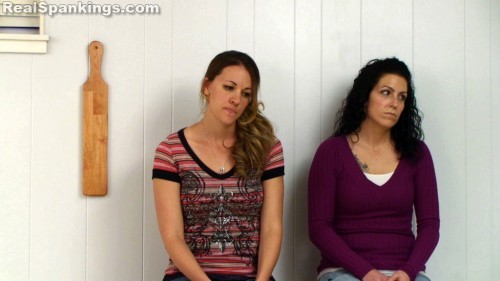 Waiting to be paddled at school

Here we have two young ladies, both in trouble for various school offenses, and they both need to have their bottoms paddled in a manner that will not only teach them a lesson, but will also discourage such behavior in the future.  One of the problems with a hard paddling with a heavy paddle is that after just a few swats a young lady’s bottom tends to go numb.

With both of these girls requiring 12 hard swats to their bottoms, he changes things up, and instead of giving them all 12 at once, therefore allowing their butts to be numb during part of their paddling; he has them switch places after the first three swats.  Once they have each had their three swats, he lets some time pass to assure that all of the feeling has returned to their bottoms.  While a hard paddling will indeed lead to them being sore for a long time, he wants to be sure that during the paddling itself that they are able to feel the full pain of each swat.  There is no point in paddling a bottom that is going numb if he is able to take the time to make it even more painful.

Another technique that he uses, to assure maximum pain and effectiveness, is to alter the position that the girls are paddled in.  For the first three swats that the girls receive, he only has them put their hands on their knees.  This allows each hard paddle swat to primarily impact the skin and the first layer of muscles of their bottoms.  This allows for maximum sting, but without deep impact to the underlying muscles, it also cuts down on the amount of numbness they will experience at the beginning of their paddling. 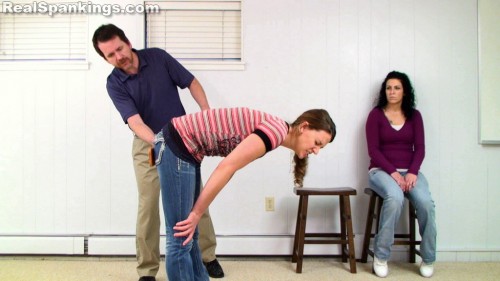 After two rounds of three swats each, with break in between to allow the numbness to go away, he chooses to target deeper muscles in their bottoms.  The first half of the paddling was designed to achieve maximum pain at that very moment, but for the second half the goal is to produce pain that will last as long as possible.  For any proper school paddling, a young lady’s body will produce endorphins to help combat the pain she is experiencing.  This generally means that towards the end of her paddling, or right after it is over, the body will do everything it can to make the pain easier for her to endure.  Yes, it will have been a very painful experience, and will likely have caused tears, but as soon as it is over, the pain seems to subside a lot as a result of the endorphins.

The whole purpose of the second half of the paddling is to make sure that when the endorphins begin to fade (usually within about 30 minutes) that she fully realize that the punishment is not only not over, but actually just beginning.  The way this is accomplished is by having these young ladies change their position slightly.  For the next three swats, they will not just have their hands on their knees; they are now required to grab their ankles.

Required to grab her ankles for a school paddling, to assure a properly bruised bottom.

You can see from the animation above that this further tightens their bottoms, pressing the deep muscles closer to the surface, allowing the paddle to make a deeper impact.  A smack to just the skin only produces redness and stinging, while a swat to the deep muscle tissue produces bruising and long term soreness, which should always be the goal.  By having them grab their ankles he is able to rest assured that when their 30 minutes of endorphins wears off that they will becoming acutely aware of the paddling they received. 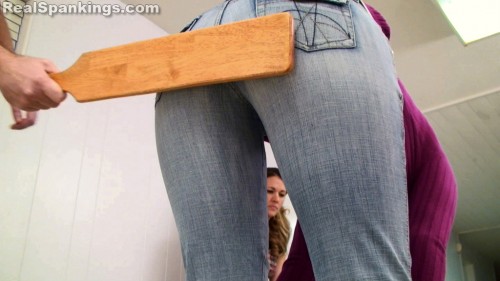 By making her grab her ankles he knows the paddle will bruise her bottom nicely.

Just as before, after the three swats targeting the deep muscle tissue have been applied, he once again gives them a little break.  Hard swats to a young lady’s bottom, while she is grabbing her ankles, almost always results in some numbness.  He will allow an extra few minutes before the final round of three, to assure that they fully feel the last three swats.

For the final three swats, he chooses to have them bend even farther and requires them to place their hands on the floor.  This further tightens the bottom, and pushes additional muscles closer to the surface.  He is systematically making sure that the paddle impacts as deep as it can with each position.   He is no longer concerned about numbness, or endorphins, at this point it is all about doing his very best to make sure they cannot sit down comfortably for at least two days.  He makes sure that these final three swats are as absolutely as hard as he can provide.

The last three swats will be with her hands on the ground in order to make her bottom as sore as possible.

While the first portion of the paddling was designed to provide as much pain as possible while they were being paddled, and the second to make sure that after the endorphins wore off that they were feeling it, the final portion is all about the days to come. After a well paddled young lady has a night’s sleep, all of those muscles that were effected tighten up which drastically elevates the amount of pain involved.  He does not want them waking up in the morning with the paddling being a distant memory, he wants the punishment to begin yet again.  By requiring them to assume all three positions, he can be assured that they will indeed be aware that they are still being punished the next morning.

There is no doubt that this is a very painful position for a high school girl to be paddled in.

Ideally, these girls will have been paddled early in the school week and not on a Friday.  Having a weekend at home allows them to better seek positions of comfort on softer furniture, to even lie down on their bellies in bed.  But what he really wants is for them to be at school, trying to sit at a hard wooden desk.  This allows every single moment at school for the next two days to be a punishment.  It allows them to be very focused on the fact they were paddled, but more importantly why. 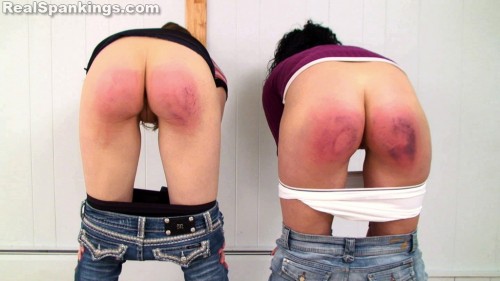 We are lucky enough in this paddling video to be able to see the results of this well thought out and highly effective punishment.  While they both received 12 swats in three positions, they clearly bruise differently.  Just because the girl on the right is showing more bruising, it does not mean the girl on the left got off easy.  What is really clear is that there is no doubt that a lesson was learned during this process. You can also see that there are almost different layers of bruising as he targeted different parts of the muscles with the different positions. Even more importantly, the “sit spot” being the part of the bottom that touches a chair when they try to sit down is perfectly covered.  They will not be able to wiggle around and find a position of comfort and will be forced to endure the pain for as many days that their bottoms are sore.

This very severe and well thought out school paddling demonstrates exactly how effective a school paddling can be when the person in charge is willing to go the extra mile to do a good job.  We have seen how with proper force, breaks in between swats, and multiple positions, that a teen girl’s bottom can become a canvass for learning.  Yes, this might all be from a nicely produced spanking video, but look again at the after shots and tell me if you think these girls will be sitting gingerly for the next few days.

All content is from the HD video in the member’s area of Realspankings.com