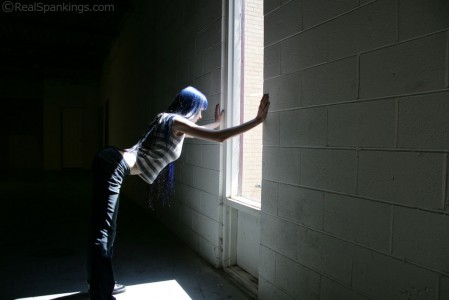 Bending over in the hallway, waiting for her school paddling, is much more common than you think.

So when taking a look at the recent statistics on school corporal punishment in the US, as reported by the Department of Education in recent years, they show that 223,190 students were paddled at school during a single school year.  I would have to guess that this number is very conservative, as in the more rural areas, especially in the ones in which the teachers and coaches are also allowed to paddle students, that 75% of the paddlings are undocumented.  This could easily bring the numbers to well over 500,000 students paddled, but I will use a conservative number and go with 350,000 students.

So if we want to question how often a school paddling really takes place, we need to crunch the numbers.  The average school, not including weekend and holidays, has 180 days in its school year.  The average school day, as far as time that the students are in class, is 6.7 hours a day.  If you do the math, that gives us an average of 1944 school paddlings a day in the US.  If looked at more closely, this is around 290 school paddling every hour, or about one every 12 seconds.  This means that in the time it took you to read to this point right here, at least two school paddlings were administered to the bottom of a student.

So while there are many posts on the internet about school paddling that are clearly someone’s fantasy, you must remember that a school paddling, actually taking place in the US schools every 12 seconds, is very much the reality.  At this very moment, as you read these very words, somewhere in America there is a teen girl, standing up from her chair in the principal’s office, being told to bend over and grab her ankles.  She has no say in the matter, not only is this allowed at this school, but her parents signed a form authorizing it.  This principal is not worried about lawsuits, or angry parents, as this community embraces corporal punishment.  His only concern is paddling her bottom hard enough to make sure that she never commits the offense again.  This is a school in which corporal punishment is the primary form of discipline and it is used not only liberally, but severely.  This punishment will be documented and she will be part of the statistics.

A high school girl bending over for a severe paddling is a daily occurrence in high school.

But in reality, when teachers are allowed to paddle students, this does not take place in such an official manner.  A teacher, finally fed up with a student’s disruptions in class, grabs her paddle from her filing cabinet and invites the student out into the hall.  There is no long discussion, there is no formal paperwork, and there is simply a teacher that has decided to teach a student that once and for all, she needs to stop being such a nuisance in class.  The offending girl is told to bend over, stretch her arms out, and place her hands on the wall.  This teacher’s only concern is making sure that this student and all the others who are about to hear it, know to get their acts together.  The very best way for her to accomplish this is to paddle this young lady’s bottom as hard as she can.  She elects to swing her paddle with both hands, channeling the energy she learned from playing softball in college.  Her goal is tears and a bruised butt and does not stop until she has accomplished both.

Many teachers are authorized to apply corporal punishment in high school.

In the time it has taken you to read this far and look at the animations, there have been as many as 10 school paddlings administered.  And as you read this paragraph, there is no doubt, that in some small school, in a rural area of a Southern state, there are a group of girls standing and waiting their turn for a paddling.  Let’s face it; girls often get in trouble together, as it is the group mentality that often gives birth to poor decisions.  Maybe this school requires that students are paddled out of the view of other students, so one at a time, they are taken to a private spot like the school stairwell.  So one at a time, they are each marched up the stairs, told to grab their ankles, and then have their teen bottoms paddled long and hard.  Each of them have to endure an intense and severe session with the heavy paddle, and one by one they learn their lesson.

Each girl is paddled individually in the stair well.

As the end of the hour approaches, bells are ringing in classrooms across the country.  Most students will get up from their desk, go to their locker, and then head to their next class.  But as this blog post is being typed, somewhere, in one of the 1000’s of school that still paddle, there is a young lady who has been asked to stay behind in class.  She may have done something as bad as cheating, or something as innocent as chewing gum in class.  In today’s day and age, there is a very good chance that she was caught texting on her phone in class.  Regardless of the reason, at this very moment, she is bending over the teacher’s desk, in an empty classroom, and presents her bottom, in those way to tight jeans that she just loves to wear.  She is also, at this very moment in time, regretting the little G-string panties that she chose to wear under those jeans.  That thin layer of tight denim is not going to do much to protect her bottom from the man who is not only her teacher, but is a coach, one that even the boys fear a paddling from.  There are those few students who knew exactly what was about to happen and have gathered outside the classroom door, listening in and trying to sneak a peek through the tiny glass on the door.  As the 1st crack echoes beyond the classroom and into the halls, more students begin to gather to see who is getting licks.  A few feel sorry for her as they hear the crying begin from the way too severe licks, but mostly it is giggling and fun for those that are not on the receiving end.  It is possible, that right now, as you read these words, she is opening the door, tears in her eyes, and embarrassed as she can be as she walks past the students waiting to get into that classroom. 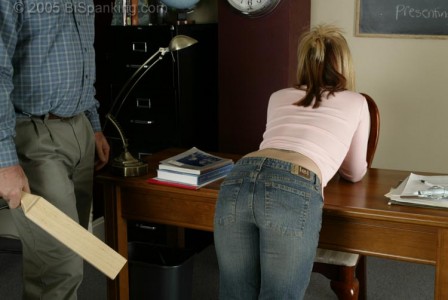 A girl getting paddled by a teacher is a daily occurrence in US high schools.

While every one of the 1944 paddlings that will be administered today will not be the most severe paddlings every administered, you 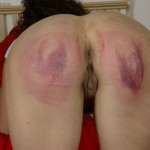 The results of a severe paddling.

have to imagine that there will indeed be many bottoms bruised.  All of the paddlings will not take place 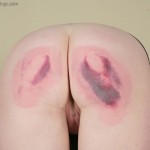 It only took six swats to bruise her bottom.

in high school, and they will not all be applied to girls.  But with close to 2000 paddling being administered today, the chances are that this evening, in many bedrooms, across many states, there will be high schools girls looking at their bare bottoms in the mirror and all they will see is black and blue.  Because there will be that one girl who was being paddled for a second offense of the same infraction and the administrator decided to give her the maximum number of swats and to do so as hard as he could.  Or maybe she was a 1st time offender, but she was caught bullying and a very real example needed to be made of her.  She might be a young lady who was unfortunate enough to be sent to that teacher or coach, who is known as a heavy hitter and prides himself on the severity of the paddlings he administers.  That coach that does not care if it is a 90 lb., 16 year old girl, or a 220 football linebacker that he is paddling.  He swings for the fences with every bottom that is presented to him and he sends them all away in tears.  Think this is the stuff of fantasies?  What about this girl whose name and cute little face and bottom have been all over the news in recent month.  She was paddled hard, by a male administrator, and in her own words explains that her little teen bottom still has marks days later. 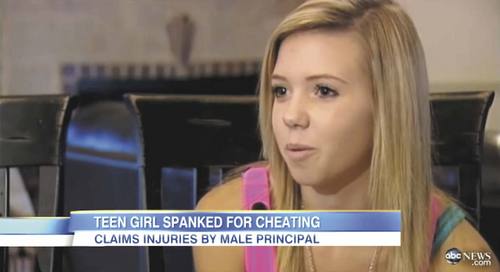 This Texas teen recently made the news as her mother complained that not only was she spanked by a male principal, but that it left marks for several days. She was caught letting another student copy from her test.

Out of those 1944 that went home today after having been paddled, I would guess at the very least, 10% are also going to get it at home.  Which means this evening, as you sit down for dinner, in the privacy of a conservative Christian home, there is a young lady getting her recently paddled and bruised bottom spanked.  It may be with dad’s belt or paddle, it could even be OTK from her mom.  She may be lowering her jeans and panties right now in mom’s bedroom for a good three minutes with a wooden hairbrush.  She might, at this very moment, be bending over the counter in the kitchen as mom pulls out the heavy wooden spoon and spanks her in front of her siblings.  Quite possibly, she is sitting in her room at this very moment, waiting for dad to get home from work.  Dad believes strongly in if you get at school you get it at home, and his paddle is even bigger than the one the school uses. 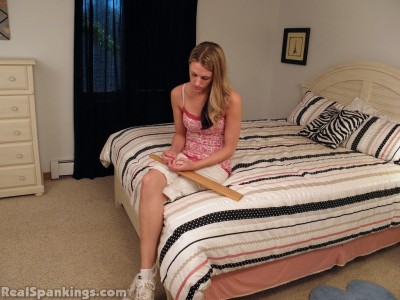 After being paddled at school, this high school girl waits in her room, with dad’s paddle, knowing he will paddle her longer, harder, and on her bare bottom.

It might sometimes seem like fantasy, but statistics do not lie.  If you spent an average of 4 minutes to read this post and watch the animations, then the reality of it all is that more than 19 different paddlings occurred during the same time period.  In the time you took to read about school paddlings, more than 100 paddle swats occurred leaving young ladies throughout the country with bruised bottoms and tears in their eyes.