I know a girl that moved from California to Texas in the early 80’s while she was in middle school.  Her family lived in a small, but affluent suburb of Dallas, one town away from where the Dallas Cowboy’s practice.  The town had its own “independent school district” which consisted over a primary school (K-6), a middle school (7-9), and a high school.  As their own district, they came up with their own policies and were not governed by the county.  At this time in Texas, paddling was alive and well (as it still is in much of the state), with neighboring Dallas county paddling more student’s bottoms than most districts combined.

This girl came from a state where paddling was not allowed, so it was a little bit of a shock.  She never received a paddling in middle school, but received 3 over the course of high school.  At their high school, it was most typical to receive a paddling from a coach or a school administrator.  Coaches paddled pretty freely in the privacy of their coaching offices.  The occasional coach would also paddle within the classes they taught.  She witnessed an in class paddling on a couple occasions and heard many more paddlings being administered in the hallway.  Outside of the athletics program, it was most typical for a student to be sent to the office for any type of discipline, so most paddlings took place in the privacy of the principal’s office.

Her experience with being paddled was quite unique and the subject of today’s post.  There was a female coach in her school that coached volleyball as well as the drill team.  The drill team is sort of a dance troop that performs at the school games, but is not the same as a cheerleading squad.  They are quite common in most Texas high schools.  This girl was on the drill team and thought the coach was a bit of a tyrant.  She was very strict, quite rude, and had no trouble embarrassing a member of her squad in very public ways.  She started each week by having the girl’s line up to be weighed, making plenty of loud comments if a girl had gained weight.  This coach, like any other in the school, was authorized to paddle members of the drill team.  She would on occasion escort a member of the team into her office to apply a paddling, but generally she chose another version.

As described to me, the setup was that there was a female locker room with a coach’s office attached to it.  There were two doors to the coach’s office, one went to the locker room, and the other led to a coach’s common area which was shared with the male coaches.  From the 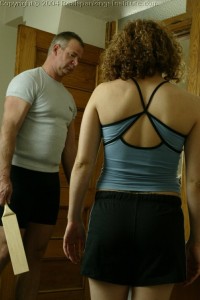 About to get a severe paddling on her teen bottom, at school, from the coach

common area, it was the same concept, being that there was a door that led to the male coach’s offices and the boy’s locker room.  The girl believed that from day one that she never really got along with the drill team coach, so they butted heads on more than one occasion.  When things got heated between them, it ended up with this girl being paddled.  On all three occasions, the female coach chose not to paddle her herself.  She instead chose to march the girl through her office to the common area for the coaches.  The female coach would then get a male coach to do the paddling, if available; she would choose the one hard paddling coach in particular.

She told me that as she recalled it, she was generally wearing her typical workout clothed when she was paddled.  On one occasion the paddling took place with just the male and female coach present, on the other two occasions she was paddled with a few coaches present in the common area.  While there were subtle variations to the paddlings she received, for the most part they took place as follows.  She was marched into the common area where all the coaches were and was told to hang out for a moment.  The female coach would find the coach she was looking for and speak with him briefly.  The basics of the 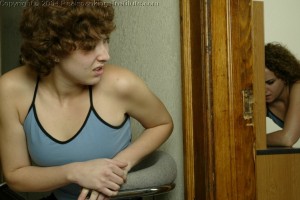 Waiting for her school paddling

conversation was that the coach had a student that was really acting up and that she wanted her paddled harder than she was able to paddle herself.  The male coach would agree to administer the paddling and go into his office to retrieve his school paddle.  She described this coach’s paddle as “freakin’ huge” with a handle wrapped in duct tape.  The female coach would instruct the girl to bend over the large board room type table in the middle of the room, where she would have to lay completely flat with her chest pressed up against the table and her hands flat on the surface.  The next part is quite unique and I do not think I have heard a true account with detail.  The female coach would tell the male coach, “Let’s start with six”.  The number was not fully set in advance; the girl told me that it was clear that the coach was looking for one thing, tears.

The male coach would comply with the request and start the paddling.  She said the paddling hurt far more than she ever could have imagined.  She had never seen the coach paddle a boy before, but she guessed that he probably paddled her equally as hard.  Every swat hit in the exact same spot. Which she says included a tiny bit of the top of her thigh. 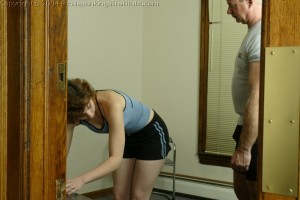 About to be paddled at school by the coach.

She said that each one literally took her breath away and she tried hard to fight back the tears.  The first time she was paddled by this coach, she managed to hold back on the tears for the 1st six swats.  She did not want to give her “bitch coach” the satisfaction of seeing her cry.  When the paddling was complete, the female coach looked to the male coach, and said “let’s give her another six”.  The girl thought that there was probably a stated maximum for how many swats a student could receive during a paddling, but that these rules did not seem to apply in the privacy of the coach’s area.  Knowing that she was going to have to suffer through another six, after the 7th swat, she broke down.  She said it was not a little sniffle, and that she had been trying to fight off the tears so hard, that when she finally let loose, that she really cried hard.  Her tears had no effect on the proceeding and she was given the remaining five swats, just as hard as the first six.

As soon as the paddling was over, she was immediately told to stand and almost hurried away, back to the girl’s locker room.  The girl felt that the coach always did this on purpose.  She was such a bitch that she wanted to bring a still crying girl into the locker 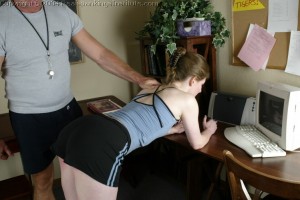 room for everyone to observe.  This girl went to her locker, and changed for class, still very much crying.  She stated that she could not remember a time in which a girl was taken from the locker room for a paddling from the male coach, which they were not brought back in tears.  It was certainly the case for all three paddlings she received in this manner.  She said that this was the typical paddling experience for her, but there were some slight variations.  On her second paddling, from the same male coach, she did not fight the tears, and ended up only getting 8 swats with the board.  For that paddling she was made to bend over the table as before, but it was odd for her, as there were 3-4 coaches having lunch at the table.  She said she just placed her forehead on the table so she would not have to see them watching her get paddled.  Her last paddling was administered by a different coach, one she had never seen before.  She cannot recall who’s idea is was, but she was made to spread her legs wide and grab her ankles for the paddling.  She stated that he did not 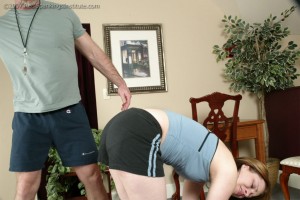 Grabbing her ankles for a hard paddling from football coach

paddle quite as hard, but it still went until she was in tears.  Her interpretation of the 1st two paddlings was that the coach she usually asked to paddle was probably “a bit into it”.  She felt that he felt no remorse and certainly was not trying to go easy.  She believed that he was paddling as hard as he could swing and that he included her upper thighs on purpose, as every swat seemed to hit there.  She said the paddlings always left her bruised and sore, and that it hurt to sit for a couple of days.  In hindsight she thinks that the paddlings were effective, as she found herself trying very hard not get in trouble with her drill team coach. She felt that overall the paddling might have been a little abusive, but it certainly got results.

These school paddling pictures come from the strict paddling videos in the member’s area or RealspankingsInstitute.com