Right now, at this very moment as you read this post, a school paddling is taking place in the US.  Based on the statistics from the US Department of Education, from the first bell to the last bell, in schools across America, there will be an average of 1944 school paddling administered today.  Based on how many hours a typical high school day lasts, this breaks down to around one paddling every 12 seconds.  Statistics also show that around one third of those paddling will be administered to females.  So in the next minute, 2 of the 5 students that will be presenting their butts for some very real corporal punishment will be girls.

Presenting her 18 year old bottom for a hard paddling in high school.

This is not spanking fantasy; this is reality as reported by the US government.  You would also have to imagine that a very large portion of the paddlings that are administered are not being reported.  Not every coach and teacher that is authorized to paddle is filling out all of the proper documentation; they are simply busting butts in hallways and locker rooms, without a pen ever being put to paper.  The paddlings that are administered will certainly vary in severity as different administrators choose to paddle in different ways.  There will be some young ladies that will be paddled gently and the whole experience will be little more than just an embarrassment for her. But of the 648 young ladies that will be bending over today for some discipline with a paddle, you would have to imagine that for many of them, it will be an experience that she will never forget.

At this very moment there is a young lady getting paddled in high school in a manner that she will not soon forget.

Yes, we read about recent cases in which a high school senior was sent to the office and had her butt paddled in a manner that left her bruised, and then mom and dad call the school and the press and raise some hell.  But if you look at a state like Mississippi, their feelings on corporal punishment have not changed much over the last half a century.  This is not a state in which after a young lady is paddled at school, that her parents complain about her sore bottom.  This is a state in which they supplement her sore bottom with a heavy dose of the belt.  In Mississippi last year alone, 38,131 students were paddled, which accounts for 7.5% of the total student population on the state.  The girls that are presenting their bottoms to be paddled today in Mississippi schools are not bending over for a gentle but embarrassing paddling; they are presenting their bottoms for some good old fashioned corporal punishment with a heavy wooden school paddle.  That principal is not going easy to avoid complaints from parents, he is calling her parents and letting them know exactly what is happening.  Those traditional Southern parents are going to encourage him to do a good job, while also assuring him that she will be getting much more of the same when she gets home.  That very same girl might just find herself in the living room, over the arm of the couch, while dad wears her bottom out further with his belt.

Her punishment is not ever when she leaves the principal’s office. When her dad gets home from work, her bottom is bared and he wears her bottom out again with his belt.

In these Southern states, especially in the rural parts, parents still believe that bruising a bottom helps a child learn.  They grew up being spanked in a manner that can only be described as severe and they know how much it taught them a lesson.  Even if it is not them that are disciplining their child, they expect that the person that is tasked with the job will give it the same amount of effort.  If a parent from Mississippi gets a call that their 17 year old daughter is in the school office for bad behavior and is going to get paddled, well they expect that there will be some tears involved.  They see the entire purpose of corporal punishment is for as much pain as possible to be applied to their daughter’s bottom.

So if you look at the pictures, videos, and animations from this blog as pure fantasy, you would be mistaken.  The images included in this post may be produced by an adult website, but what you are seeing is the real thing.  Since you began reading this post, at least four high school age girls have experienced this very thing.  Somewhere, in all of the states that allow it, a young lady was sitting in an office while an administrator looks over her school records and considers her current offense.  While you were reading this post she received the news that he has decided to paddle her.  For at least one of the young ladies to receive that news in the last few minutes, she is sitting before a principal who strongly believes in the firm use of school corporal punishment.  He is not influenced by the fact that she is a beautiful 18 year old, who is legally an adult.  It does not matter to him that she is quite petite, with a tiny little bottom.  He is in fact going to use the same heavy and thick paddle that he uses to paddle the boys.

Hard swats with a heavy paddle are exactly what is needed to teach this high school girl a lesson.

This principal, right now at this very moment, is telling this deserving young lady to bend over, with her arms fully outstretched, and to grab the edge of his desk.  Even though she is as now as nervous as she has ever been in her life, she is doing what she is told.  Whatever state this is taking place in, this is the reality of the school she attends and her actions have warranted a paddling, so there is really not much she can do about it.  Maybe her parents have been contacted, maybe they have not, but nothing is going to change the fact that she is about to be paddled.  Somewhere at this moment, this principal is moving around his desk with the large paddle in his hand and stepping into position behind the young lady presenting her bottom to be paddled.  He places the large paddle against her bottom and raises the paddle high in the air.  Right now he only has one thought on his mind, school discipline.  It is his job to make sure that order is kept, rules are followed, and that anything that gets in the way of the educational process is dealt with.  Over his years as a school principal he has found that the best way to deal with such issues is with the object in his hand.  He knows he will not be doing her any favors by going easy on her, which is exactly why that first swat lifts her onto her toes. 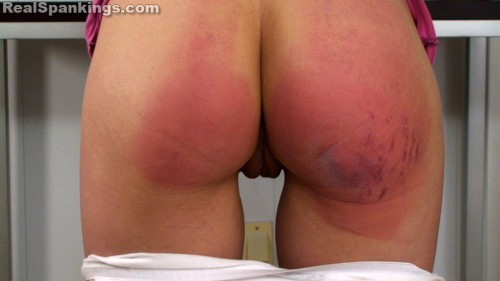 This is the results from the above girl receiving 9 swats over her pants and panties.

The sounds of the first swat echo throughout his small office and he recognizes it as the sound of learning.  The additional sounds of learning follow just a few seconds later as he hears the crack in her voice and knows that the tears are starting to flow.  He is not affected by this young lady bent over before him starting to cry, this is the goal.  This might be a school setting, but she has engaged in behavior that she is in trouble for and she is getting spanked as a result.  A spanking is supposed to hurt, a spanking is supposed to create tears, and most of all; a spanking by design is intended to create a sore bottom.  This might not be his daughter, but he is in charge of her development for half of her waking hours, five days a week.  Somewhere, right now, this principal is raising the paddle again to apply an equally as hard swat to her petite bottom.  After the crack of the second swat the sound of her crying and distress grows louder.  He knows that each swat is leaving a perfect purple mark across her butt cheeks, the kind of mark that helps assure that she will never return to his office.  With just two swats he has probably already made his point and clearly she is feeling the effects, but he knows that the more swats she receives, the sorer she will be, thus having been taught a better lesson.  So as you read this, the rest of the swats are being applied to the already bruised bottom of a high school girl somewhere.

Finally, her punishment is complete but certainly the tears have not stopped.  He is telling her right now to have a seat, something 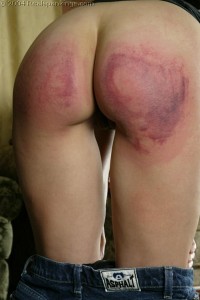 Her bottom shows the results of a school paddling and a session with dad’s belt.

her bottom is fully against.  She is cringing with pain as her bottom touches the hard wood chair in his office and the full reality of her situation is setting in.  Her bottom is not just stinging from being paddled; it will continue to throb for hours.  Tomorrow morning, long after you have finished reading this, she is going to wake up to a brand new reminder of her behavior at school today.  With the statistics of 648 girls being paddled at school over the course of this day, how many do you think are going to wake up with sore bottoms tomorrow? Even if only ten percent received the type of paddling described here, that means that 65 teen girls will wake up tomorrow morning with a bruised bottom.  They will get out of bed and feel how tight the muscles of their bottom are feeling.  Those first few steps towards the bathroom will be an instant reminder of the behavior that they engaged in.  I also guarantee for every sore bottomed girl out there, each and every one will check her bottom in the mirror.  They will likely see large bull’s eye shaped bruises on their butts.  If even one percent of them live in a home in which “you get it at school, you get it at home”, this means that at least 6 young ladies are looking at more than just the bruises from the paddling the day before.  These young ladies, with the strictest of parents are also likely looking at a well stripped and welted ass from a long session with dad’s belt. I assure you that corporal punishment in the home and in school is alive and well in America today, and right now, at this very moment it is indeed taking place. If you don’t believe me, take a listen as three swats are being applied forcefully to a young lady at this very moment.