School paddle on display as a warning 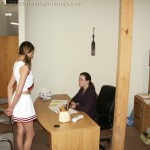 Sent to the principal, she cannot help but notice the school paddle hanging on her wall.

There are many houses throughout the world in which the implement that is used to punishment the bottom of a teen girl is prominently on display.  This is most typical in a community in which corporal punishment is very common and acceptable in most of the households.  It is not considered out of place or unusual to guests of the home, it is simply a reality.  It does however create a bit of embarrassment for the young lady whose bottom it is used on.  It is not only a daily reminder to her that her but can still be spanked at any time, it lets any friend of her that comes over know that there is no doubt that this teen girl still gets her bottom spanked.

It might be as plain and out in the open as a Spencer paddle, hung on a 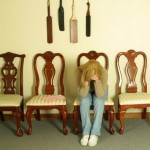 She knows one of those paddles will be used on her bottom, but which one?

nail, right there in the middle of the family room, or a little more obscure like on a wall inside the laundry room.  I knew one girl when I was growing up that had her own paddle hanging on the wall in her room.  When I asked her about it, she was quite embarrassed and clearly lied to me by telling me she thought it was kind of cool so she hung it on her wall.  There was no doubt that it was indeed used to paddle her 14 year old bottom and I suspected each of her siblings probably had their own on their walls.

The tradition of displaying an implement is also alive in well in the school of the US that allow paddling.  Many principals, coaches, and teachers display a paddle, or multiple paddles on the walls of their offices or classrooms.  The primary reason is it serves as a reminder that regardless of a student’s age, that as long as they attend high school, they may still be subjected to 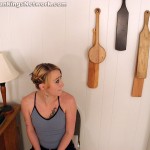 So many paddles and they are all so big. Her bottom will be bruised and sore for sure.

having their butts paddled. A girl may be 17 or 18, she may no longer get spanked at home, but as long as there is a school corporal punishment policy that allows it, she may indeed be subjected to a spanking at school.

A paddle hanging on the wall in a classroom does not have quite the same effect on a young lady’s nerves as the one hanging in a principal’s office.  Most students only see the inside of a principal’s office when they are sent there for disciplinary issues.  When she invited into his office and asked to sit down, this is typically the 1st thing she notices.  She studies every detail of the paddle.  Most students are aware they attend a school that they can be paddled at, but for many, they have never actually seen the paddle used.  It always seems huge in their eyes, they notice how thick it is, and they also notice that it seems well worn.  There is no doubt that this is not an ornamental paddle, it is really used to paddle teen butts.

In some schools, there is a room in which the paddling of students takes place, often in the main 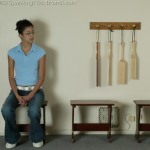 School corporal punishment will be applied to her bottom.

office area, but in such a place that there is a little privacy.  Many students, told they are going to be paddled, are sent to that room to wait.  Some principals have multiple paddles, they may vary based on offense as well as the sex and age of the students.  A young lady sent to wait for her punishment, in a room with multiple paddles, can’t help but wonder which one will be used on her bottom.  Her eyes are transfixed on the biggest of paddles, wondering why in the hell a paddle that large even exists.  She tries to convince herself that there is no way that this paddle will be the one used on her butt.  After all, this is her 1st offense; she is 115 lbs., and a pretty good student.  That paddle must be used on the very bad kids, or the football players, anyone but her. 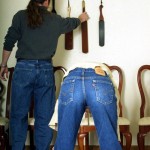 Grabbing her ankles to be paddled and her worst fears come true, he reaches for the big paddle.

Left alone with only her thoughts, far too long as far as she is considered, she convinces herself that the smallest paddle could be the only one to be used on her.  He finally enters the room, has her sign the paperwork that acknowledges that she will be paddled.  As she signs it she sees that she will be receiving six swats.  She is a little relieved as she knows that he is allowed to give as many as ten, which makes her feel he is going to go a little easy on her.  He tells her to step up to the line, widen her stance, and grab over and bend her ankles.  As she reaches down to grab her ankles, her jeans pulling tight on her bottom, she sees him walk up to the wall of implements and grab the biggest paddle on the wall…oh shit!

And it begins…the first swat with his biggest paddle.

Images come from the Realspankingspass.com family of sites.  More than 200+ realistic school paddling videos included with the pass.