She could hear how loud the paddling was as she sat outside the conference room in the school office.  She could also hear that her friend was not holding up so well during her paddling, she was pretty sure she heard some gentle sobbing.  It was 2-3 minutes after the last of ten swats had landed on her best friend’s bottom, that the door finally opened and her friend walked out and rushed past her.  Yes, she had been crying, her makeup was smeared and a mess.  With the paddle still in his hand, he told her to come on in.

Ten minutes before, as he lectured them both in his office on the dangers of smoking, he 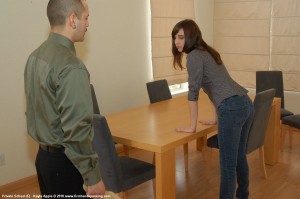 Presenting her bottom for a school corporal punishment paddling.

had seemed a little mad at them and was raising his voice a little.  Now, he was perfectly calm and even quite friendly.  In a very nice voice he instructed her to bend over and place her hands on the conference table.  She did as she was told and her mind raced as she considered the last time she had been spanked.  She had never been paddled at school, and to the best of her knowledge, the last time she had been spanked was by her mom, possibly in the 2nd or 3rd grade.  Her mom only used her hand and only gave her little bottom 3-4 spanks. 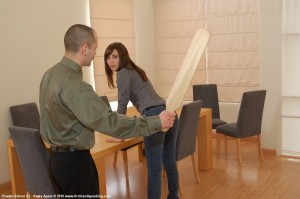 Waiting for the 1st swat to land on her bottom

For smoking at school she was told she was going to get 10 swats with the school paddle, the maximum amount of swats allowed to be given at one time, as clearly defined by district policy.  Smoking at school was getting to be an issue at this school, so for the last few months the AP always gave the maximum amount of swats for smoking violations.  Unfortunately for this high school girl, her bottom was about to feel the results of the school crackdown on smoking.  It did not matter that she had not been in much trouble before, or that she had never been paddled before, he was bound and determined to paddle the cigarettes off of his campus.

Without another word being spoken, she felt the large wooden school paddle touch her 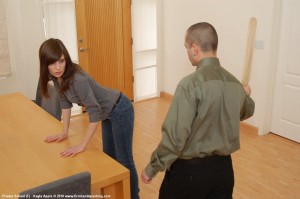 Trying to hold still as he applies ten hard swats with the school paddle.

bottom for a quick moment, then out of the corner of her eye she saw the paddle raised high in the air, and then she felt pain.  Not a little bit of pain, but pain like she could not recall feeling.  Her bottom burned as she felt herself questioning how she would ever get through this.  Before she could process all of these emotions, the next swat landed, and with it…tears.  There was just no holding back, it hurt far too much for her not to cry.  She wondered why he needed to apply ten swats to her teen bottom; two was already enough for her to never smoke at school again.  After the third swat, tears turned to all out crying.  Here she was, old enough to drive, and even old enough to buy the cigarettes that she was being paddled for smoking, but feeling like a little girl, crying her eyes out as a man she had never met before spanked her teen bottom with a large wooden paddle. 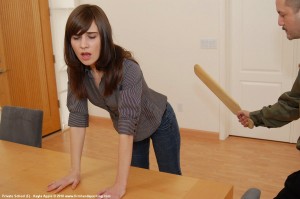 The look on her ace shows that the punishment is working.

He takes his job very serious, and one of his primary duties was to handle the disciplinary issues at school.  He had been doing this job long enough to ignore the tears, the crying, and the carrying on.  He never lightened a punishment based on a student’s reaction.  His saw her crying after the third swat as a good sign, and was quite sure that after all ten she would no longer be a student who chose to smoke on campus.  While she seemed to have learned her lesson already, he needed to make sure that her bottom was good and sore, he wanted her feeling this for a couple days.  Who knows, maybe after paddling her hard enough that she would quit smoking altogether?  He continued to raise the paddle and smack her little teen butt full force.  She was crying quite hard now, so he knew that he was doing his job well.  After the tenth swat, he stopped and allowed her to just get it all out.  He handed her a couple of tissues to dry her eyes, and gave her a couple of minutes to compose herself.  When she has finally calmed down, he simply told her “stop the smoking, and get back to class”.  With her bottom almost numb from the hard school paddling, she walked back to class.  Tomorrow she would learn what the real effects of school corporal punishment are.

This account is illustrated with the pictures that come from the school paddling video in the member’s area of firmhandspanking.com.  The model is the gorgeous Kayla Apple, who presents her bottom for serious corporal punishment in many scenes in their member’s area.