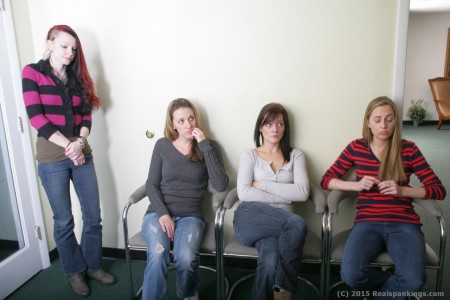 Getting the news that they will all be suspended for bullying AND they will each be paddled before being sent home.

During the application of corporal punishment in the high school setting, there are typically very clear rules that have to be followed.  While sometimes these rules are overlooked a little, especially within the athletics department, in which the coaches tend to handle things on their own, for the most part school policies are followed pretty closely.

Typically school corporal punishment policies cover the following:
– Who may administer corporal punishment.
– How many swats can be given in a given day for a given offense.
– If the person applying the paddling has to be the same sex of the student being paddled.
– If a witness if required to be present during the paddling.
– If a student has to be paddled outside the view of other students.

The last rule, which is common to most schools, is the main reason that corporal punishment is no longer administered in the classroom.  In the good old days, if a student acted up in class they might find themselves bent over the teacher’s desk getting paddled right there in front of everyone.  Currently, in the schools in which teachers are still allowed to handle corporal punishment themselves, it is done in the hallway.  While no student is allowed to see this take place, several classrooms full of students get to hear it.

They wait their turns as they listen to their friend getting her teen bottom paddled.

It is not uncommon for young ladies in the high school environment to find themselves getting into trouble together.  Most administrators will interview each girl individually, as this tends to break through the lies much quicker.  Once he has enough of the story, it is time to decide the proper disciplinary action to take.  For so many schools out there, corporal punishment is still the primary form of punishment.

Sometimes waiting is the hardest part as they hear their friend sobbing during her paddling.

So let’s consider the four girls pictured in this post.  They have all bent sent to the vice principal’s office for the frequent bullying of another classmate.  This school has a zero tolerance policy for bullying, so they will get an automatic suspension of several days.  But as many administrators know, a suspension is often just a little vacation for the naughty girls in question, so they often choose to supplement a suspension with a good paddling.  They might get to miss a few days of school, but he is going to make sure that it is done with sore bottoms.

The paddling continues until there are four very sore bottoms.

As a group the consequences of their actions are explained to them and then they are all required to wait outside of his office.  While school policy requires that no student receive corporal punishment within view of other students, there is no policy that states that they cannot hear a paddling in progress.  He know the power of listening to a hard paddling, as a young lady breaks down in tears, with the rest of the girls knowing they are next.  It is often best to go first, as the anticipation of being paddled, while listening to the others being paddled, is often just as bad as the paddling itself. 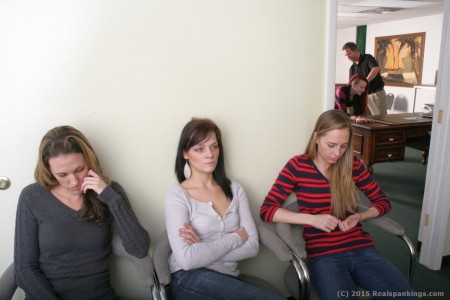 The look on their faces tell it all.

He takes this to the next level, to enhance the overall effect, by leaving the door open during the paddlings.  Each girl is just a few feet of their friends being paddled, but still within school policy by not being able to see a thing.  While they cannot see it, they can practically hear the paddle swishing through the air and they most certainly can hear the crack as a heavy wooden school paddle makes contact with a tight teen bottom.  But the scariest part of waiting, and listening, is to hear the effect the paddling is having.  It starts off with a few gasps and grunts, but eventually they hear their friends, ones that they are sure are tougher than them, slowly break down into tears, as the paddle begins to create the desired effect.