It started with a very public argument in the hallway, with dozens of students watching, which eventually led to both girls pushing each other.  The whole incident was witnessed by a teacher and they were both taken to the principal’s office.  The school code of conduct is very clear in stating that “any aggressive action towards another student” is forbidden and will also be treated in the same manner as if they had actually been in a fight.  School policy calls for a three day in school suspension, or six swats with a paddle for this offense.  The principal was especially disappointed with Kiki, as she is a cheerleader, and therefore a representative of the school. 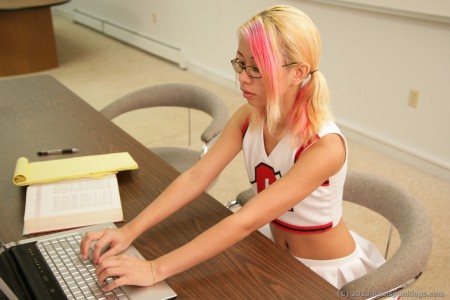 Thinking about replacing her suspension with a 6 swat paddling from the principal.

When Kiki was given her punishment options, she immediately chose the in school suspension.  Her last spanking had been at the hands of her dad, when she was 11, and she still remembered it to this day.  Her dad had worn her tiny little butt out with his belt and she knew that she wanted nothing to do with getting spanked ever again.  Just as every other student in the school, she knew that a spanking at school involved bending over and getting your butt whacked with a large wooden board.  She did not care what the other option was; she would take anything but a paddling. 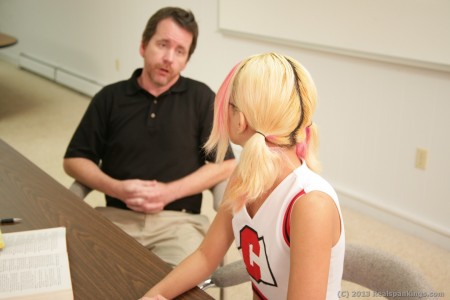 Telling the principal that she wants to be paddled.

She arrived at school the next day, a Friday, dressed in her cheer uniform, just as she always did on game day.  She reported to ISS and was asked why she was wearing her uniform.  She explained that it was for the pep rally and for the game that night.  She was quickly informed that ISS precludes her from any school activities, both during and after school, and that she would not be allowed to cheer that day, at the pep rally or the game.  For a girl whose life, friendships, and image were defined by cheerleading, this came as quite a blow.  She went into the ISS room and was left alone with her thoughts. 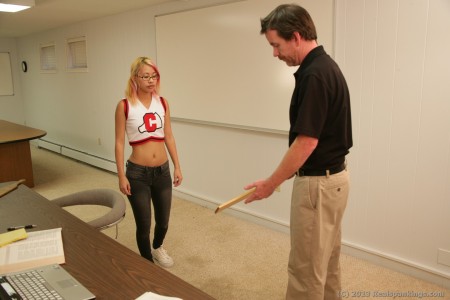 Seeing the paddle that will be used on her bottom, for the first time.

She spent a great deal of time considering the huge mistake she had made by choosing ISS.  She had no idea that it would kill all her events of the day, which led her to start thinking about the paddling.  She had only even known a couple of girls who had been paddled, but she did not think they were exaggerating when they spoke of how intensely it hurt.  She thought about that last spanking from her dad and the terrible pain of the belt.  He had made her bend over her bed and spanked her bottom hard enough, that he had to hold her in place to complete the punishment.  She can still picture the welts on her butt and how sore her bottom was even the next day.  But today was Friday; this was always the day she looked forward to.  The pep rally and the game were everything to her and there was no way that she could miss it. 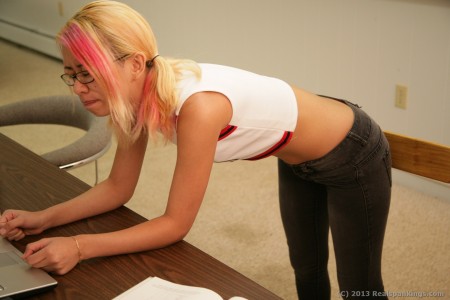 Preparing for the first swat on her padded bottom.

She finally found the courage to leave the ISS room and go and ask the Principal’s assistant if she could talk to him.  She explained that she wanted to go with the other option if it was still available.  She was told that she would pass on her concerns and she went back to ISS.  She spent a couple of hours trying to study and to write a paper that was do the following Monday.  As hard as she tried to focus, her mind always wandered back to the thought of the paddle.  It was also not lost on her that all she was wearing was her short little cheer skirt and her little red “spankies” underneath.  The irony also was not lost on her that the only thing covering her butt were called “spankies”. 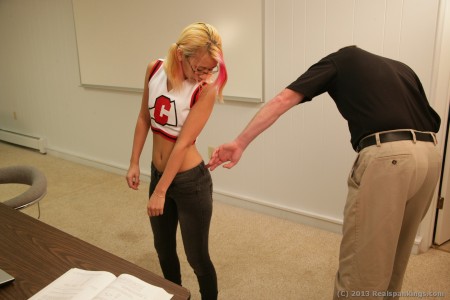 About an hour before lunch the principal finally came and sat down next to her in the ISS room.  He asked her if she really did indeed want to be paddled instead of the ISS.  She told him that she would do whatever was required to be able to go to the game.  He explained that there was no “time served” and that she would still get the full six swats.  She quickly replied, “Whatever I have to do to go to the game”.  He had her stand up and took a look at her skirt.  He decided that this was not an appropriate outfit for her to be paddled in and asked her if she had a change of clothes with her.  She said that she did, so he told her to go to the locker room and to change into some jeans for her paddling.  With her heart racing, she headed to the gym to change.  The whole time in her head, all she could hear were the words, “her paddling”.  She thought of the wooden paddle, she thought of her dad’s belt, and she thought about her poor bottom. 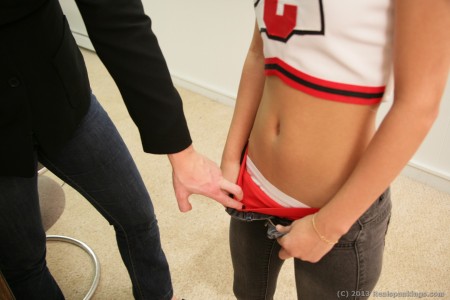 A female staff member checks to see if she is wearing extra panties.

She went into the locker room and pulled out her cheer bag and grabbed her jeans.  Sitting next to her jeans was a pair of panties.  They were not the little skimpy ones she often wore and they had the same coverage as her spankies.  She made the decision to remove her spankies, and to put the panties on underneath them.  She figured the more layers the better for her little butt.  With double layers on, she squeezed her little butt into her tight fitting jeans.  She looked in the mirror and did not think they were all that noticeable, and then slowly returned to the ISS room.  When she got there, he was waiting by the table where she had been.  Her heart sank as she saw that he had brought the paddle, that she was dreading so much, with him.  She had heard about it before, but had never seen it, and it was far bigger than she could have ever imagined.  She was very petite and that paddle looked like it would destroy her whole bottom with a single swat. 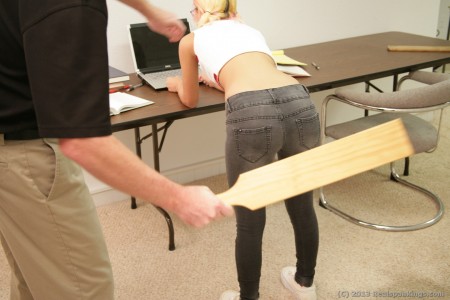 With the extra panties removed, her real paddling begins.

He wasted no time and moved her chair out of the way and told her to bend over.  She placed her hands and elbows on the table, widened her stance a little, a presented her tiny little bottom to be spanked.  He stepped up next to her and she flinched as she felt it touch her bottom.  Through the reflection in her laptop, she could see him raise the paddle high into the air, and then she felt it hit.  The pain was shocking and overwhelming, even with the extra padding in place.  He paused for a moment, seemingly contemplating something, and then he smacked her poor bottom again.  This one hurt her stinging butt even more, and she clenched her hand into fists and gritted her teeth waiting for the next swat, but it never came.  He asked her to stand up and started looking closer at her pants.  He asked her what she was wearing as something sounded off.  With a broken voice, as she was still dealing with the pain, she told him that it was just her pants.  He asked her what else she was wearing, and she said just her panties. 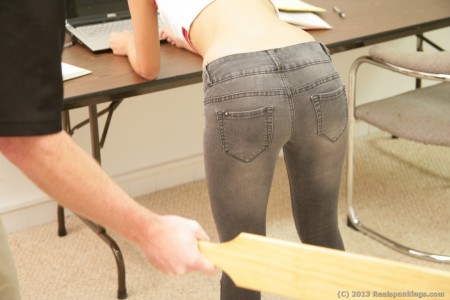 Her tiny little teen butt is paddled until the tears are flowing.

He told her to stay exactly where she was and he left the room.  She was quite confused as she had no idea where this was leading.  A minute later, his female assistant came into the ISS room and asked her what was going on under her pants.  She repeated her story, and was then told to unzip her pants and show her.  With shaking hands, as she knew she was busted, she unsnapped her tight jeans and pulled open the front to show her red spankies.  The assistant peeled back a layer of the spankies revealing the white panties below.  She was told to pull her pants back up and was then escorted back to the locker room.  With the assistant present, she was made to remove the extra layer, and was then walked back to the ISS room.  The assistant told her to stay there and that the principal would be right back with her.  She was left with contemplating how much more the last four were going to hurt without the extra padding.  Her bottom was already throbbing and she knew her butt was going to be sore for quite some time. 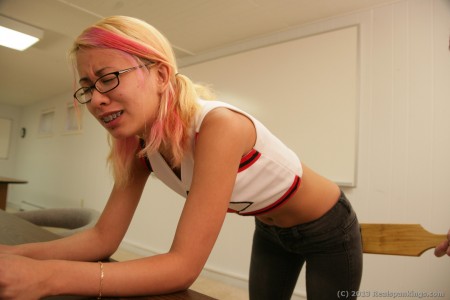 She is feeling the sting of the paddle as she is punished at school.

He eventually came back into the room and did not even seem all that mad.  He told her to bend back over and explained that he had been paddling bottoms long enough to know what it is supposed to sound like.  He smiled as he told her that she was not the first to try this, nor would she be the last.  He told her that they would now continue with her paddling, but six real swats were what she had earned, so the first two would not count.  She cringed as she realized they were starting over and once again felt the large wooden paddle touch her bottom briefly.  She watched the reflection of the paddle once again being raised into the air, and then her world was nothing but pain.  She quickly realized how much the extra panties had helped, as now her bottom was really on fire.  She squealed a little as the 1st swat hit and then prepared for the next one.  The paddle came down on the same spot on her bottom and she was really feeling it.  The first of many tears rolled down her face as the next swat hit her teen bottom.  She had very little padding and the paddle was tearing deep into the well-toned muscles of her butt.  The tears turned to crying as the paddling continued.  By the time all six swats had been delivered she could barely feel her butt.  It seemed that the whole thing had gone numb, but the tears continued to flow nevertheless. 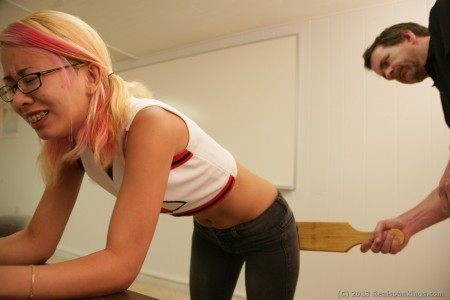 She is learning that a school paddle is much worse than daddy’s belt.

With her bottom properly punished and the clear evidence that she had learned her lesson about aggressive action at school, he announced that it was all over.  She was told that she could go back and change into her full uniform and could resume her normal school day.  With that evil paddle still in his hand, he exited the room.  She spent a little while rubbing her poor bottom and was already regretting her decision.  She was not sure how she would resume a normal school day with her butt feeling that way.  She certainly did not know how she would present a smile at the pep rally as she attempted their routines and stunts.  She considered the drill in which hands were on her bottom supporting her as she was tossed into the air, and then caught.  All she had been able to think about was getting to cheer that day, not all she could think about was her sore butt.

This scene is a sneak peek, courtesy of Realspankings.com.  The full video of the exact scenario I just described, will appear in their member’s area in November, 2013.