Two high school girls get a school padding for fighting 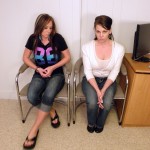 Sent to the office for fighting, they will both be paddled.

It is pretty standard at this school, corporal punishment is always applied if students are caught fighting.  It does not matter if it is male or female students, a school paddling is mandatory.  The only exclusion is if the student’s parents have not authorized corporal punishment to be administered to their child.

These two young ladies are both 18 and have been caught fighting in the halls between classes.  They are both sent to the school office for the principal to figure out what happened.  Before he calls either girl into his office, he has his secretary check the computer to see if corporal punishment is authorized.  Assuming this fight was mutual combat and that one girl did not just attack the other, he knows he will be paddling their bottoms. 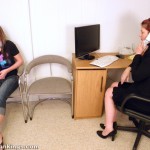 Calling for mom for authorization to paddle her butt.

these girls.  She finds that one girl has a form on file, while the other does not.  The principal listens to the 1st girl’s side of the story and it seems these girls have not been getting along and that this fight has been coming for quite some time. He sends the 1st girl back to wait and finds out that the other girl does not have a form on file.  He asks his secretary to call one of her parents and get authorization to paddle their daughter.

He interviews the second girl and her story is close to the same. Yes, the other girl threw the 1st punch, but they had squared off in the hall and were challenging each other to a fight.  This is not a case of bullying, of one girl being attacked; these girls were both active participants in this fight.  This is all the information he requires and has soon as he has consent he will be bruising both of their bottoms.  He sends the 2nd girl back out and checks on the progress of the phone call to the parents.  His secretary informs them that she received verbal confirmation to use corporal punishment.  She also throws in the fact that the parent on the phone was quite adamant that her daughter be paddled and made it clear she would get more of the same when she came home.  He would be sure to send her home with a nice sore bottom for her parents to work with. 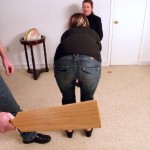 Getting her bottom bruised for fighting.

School policy requires a same sex witness be present for all paddlings administered in the school.  He calls in the 1st girl and his secretary to witness.  The secretary sits down in a chair in front of the 1st girl, as she is moved to the center of his office and required to bend over and put her hands on her knees.  He is good at his job and takes it very seriously.  He gains no pleasure from paddling teen girl’s bottoms, but he knows that the more effectively he paddles a young lady, that it greatly decreases the chance of her returning to her office. As a result, he paddles every bottom that is presented to him, in a manner that they will never forget.

Once she is in place, he informs her of how many swats she will be 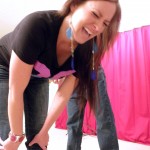 The tears come quick from a severe paddling at school

receiving, which in the case of fighting, is always the school allowed maximum, no exceptions.  For any student who has ever been paddled before, being told that she is going to get 10 swats is never good news. The paddle he uses is quite large and is made from heavy oak.  He takes great care in paddling safely and always applies the paddle on the lowest part of their bottoms.  This keeps the heavy wood from hitting their tailbone and has the effect of making a bottom very sore to sit on.  Being that this is the only safe place to hit a bottom with great force, using such a heavy paddle, each and every swat is applied on the exact same spot.  This tends to leave a young lady bruised for several days, with two big bull’s eye bruises on her butt. 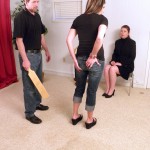 A 10 swat paddling will leave her teen bottom bruised for days.

He raises the paddle high in the air and swats her bottom full force.  The poor young lady in the lobby can hear every swat, and the girl being paddled reactions, even through the closed office door.  Her bottom starts to tingle as she hears how loud the swats are, knowing she is next.  It just takes one swat before her eyes fill with tears. He hits hard and has a way of getting a girl’s attention right away.  There is no warm-up, it is not hardest at the end.  The fact is, he swings as hard as he can with every swat, from the beginning to the end.  He sees no point in paddling a girl at school if it not going to be the most effective punishment as possible. This is a small community in which corporal punishment is accepted.  In fact, after a 10 year ban on corporal punishment in this school district, it was the parents in the community that lobbied to have it brought back.  He does not have to worry about lawsuits, news reports, and such silliness that plagues other communities; these parents expect their daughters will come home with a bruised bottom if they misbehave at school.  He is never one to disappoint as any girl he paddles will be bruised for days.

He learned long ago to ignore the pleas and cried from the girls he paddles.  A spanking is

Feeling the burn of hard swats with a heavy school paddle.

supposed to hurt, they are supposed to cry, and they are supposed to learn a lesson.  Even when a girl is crying her eyes out, after just a few swats, that is not a reason to lighten up, or give them less swats than they earned.  He sees crying as a sign of progress in changing their behavior.  The more they cry, the more they learn.  While tears might be immediate, it is the full ten swats that leads to a bottom being sore for more than just a few hours. He wants them to remember this paddling every time they attempt to sit for the next few days.  He wants sitting to be a painful experience, assuring that the lesson lasts for many days after the actual paddling. 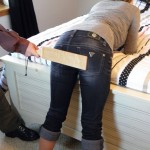 When he has paddled both girls, he makes a phone call to the parents.  He feels if he is going to take the time to paddle someone’s daughter, especially with such severity, that a personal phone call is required.  He wants a girl’s parents to understand exactly what happened, while the girl was in trouble, and the punishment she received.  Parents are much more understanding of a young lady that can’t sit down that night at the dinner table if they get the full story from not just their daughter, but the school principal.  He does not try to sugar coat any of it.  He informs each parent that the girls were fighting, that they both wanted to fight each other and that as result, their bottoms needed to be paddled.  He explains that this school finds fighting to be one of the most unacceptable behaviors in school, as no parent should have to fear their child coming home having been beaten up. He tells them point blank that he paddled their daughters very hard, giving them the maximum number of swats that school policy allows. He tells them that each young lady’s butt will be quite sore for many days and that he is hopeful that this will be enough to change her behavior permanently. 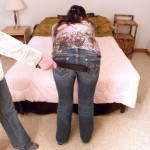 Mom gives her daughter a long and hard whoopin for getting paddled at school.

of the children, kids who get punished at school, often get it at home.  This is especially the case when the parents have been called personally by the principal.  They are not reliant on their daughter’s version of what happened, they got the story from the source.  Parents are also not shy about informing the principal about what is going to happen when the young lady gets home.  This is also part of his strategy when calling parents as he feels a punishment is more effective of the parents can be part of the process and that this event is not isolated to the school setting.  One mom lets him know that their policy is not only that if she gets it at school, that she gets it at home…in their house if they get it at school, they get double at home.  It is made very clear that this daughter will be getting 20 from her dad with his paddle.  The other mom is not quite as detailed and simply ends the phone conversation with “I will give her butt a good whoopin the moment she walks in the door…thanks for the call”.

The full ten swat paddling of both of these girls is available in the member’s area of  Realspankings.com, it is their latest update from Monday, April 8th, 2013. A very serious school paddling that leaves both girls with very bruised bottoms. This is as hard of a school paddling I have seen in a long time and these girls are not acting, they get their bottoms torn up in a very serious manner!