A very interesting twist on a spanking website is that of Spanking Teen Jessica.  In the early years she was quite active in the updates on her site and she often wrote true accounts or her childhood spankings that took place at both school and at home.  There are very details accounts of what it was like to be raised in a small religious town where corporal punishment was the typical form of discipline for most kids.  What makes her videos even more interesting is the fact that while she received strict discipline growing up, she did not enjoy it in any way.  However, as she grew just a little older, and once the parental aspect of her spankings were removed, she began to develop a spanking fetish. This allowed her to begin to explore the desire to be spanked on video, but more importantly, she went back and recreated much of what she received growing up, on video for us to see.  The school paddlings she recreates are among the best ever filmed, with every attention given to exactly how she was paddled all through high school, by the school VP, a couple of teachers, and a coach.  She writes detailed accounts of these paddlings and then films them just as they took place.  Below is the intro text she wrote regarding being paddled by the VP.  On the site she gets into much more detail as to some of the individual paddlings she received at his hands. 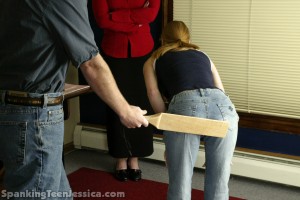 Being paddled in the presence of a witness.

“Our VP was a very educated man, surprisingly so for a small town school.  He held two Master’s degrees and was working part-time towards his Ph.D..  As a result, he was a highly respected man in our community.  His paddlings were legendary and meant a very sore bottom for anyone involved.  In the lower grades he paddled just like the teachers.  Unlike the upper school student who had to come back at the end of the day for their paddlings, he paddled the lower grades on the spot.  This consisted of him putting one leg on a chair and lifting you over his knee.  He then paddled your bottom hard and fast with both your arms and legs off the ground.  He did not give it to the lower students like the upper students, but you still got it from him much harder than a teacher would. 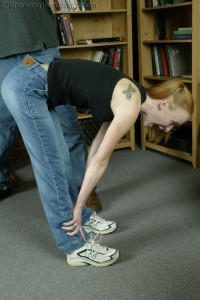 Grabbing her ankles for a padding at school

If you were sentenced a paddling from him while in the upper grades, you had to come back after school at 3:30 and be paddled then.  This gave you a whole day to think about how bad your paddling would be.  Another aspect was that if you found yourself sent to his office for any reason, your parents were called.  There was not a single time I was sent to his office that I was not paddled.  Really the only other form of punishment he gave was a paddling followed by an at home suspension.

The paddling line outside of his office was the worst.  You had to stand there and listen as all of the other student get it.  Most of those who had done this before rushed to the office after to class to be first in line.  It was much better to get it over with and be out of there.  I have stood in line where I was the only person there and all the way up to as many as 10 students in line.  The larger groups tended to happen on days that there were dress code checks.  He would announce over the loud speaker that all teachers with students in violation of the dress code were to send them to the office.  If he agreed you were dressed other than what was specified in the code, you were invited back that afternoon. 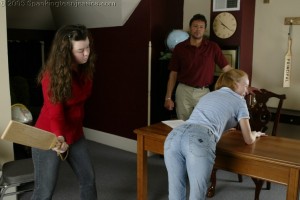 Getting a paddle from a female teacher

Every Friday, the VP went to class of his own while he worked on his Ph.D.  On these days there was a teacher that was in charge of disciplinary referrals to his office.  This was on a rotating schedule and you never knew who was going to be there on Fridays.

The VP’s paddlings can only be described as brutal.  He hit you with everything he had and there were always deep bruises as a result. Unlike the teachers, he could give you as many licks as he felt like for your offense.  If he saw you twice in one year for the same offense, you knew you were in for a long punishment.  If he was able to paddle me bare, it would have been just as intense as I got at home.  I am sure I got it a little worse than the other girls did from him.  He and my dad were close friends and sat on the City Council together.  I am 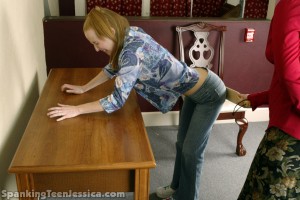 sure my dad had had the same talk with him as he had had every year with my teachers.  I am honestly surprised that he never told me to raise my dress I am almost sure my dad had given him permission.”

You can watch the full video from any of these school paddling recreations and dozens more at SpankingTeenJessica.com

If you have any doubt regarding the realism and severity of the paddlings in these school corporal punishment recreations, take a look at her butt after a ten swat school paddling scene. 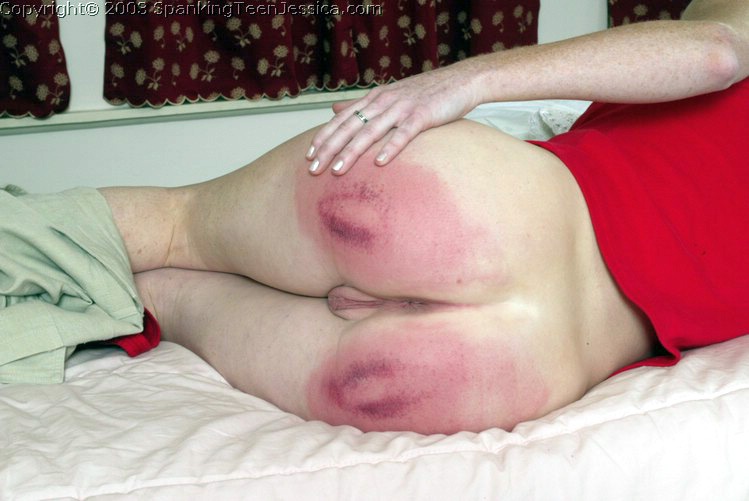 The results of a very real school paddling