18 and Paddled at School for the very 1st time 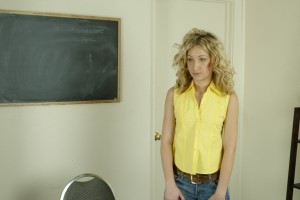 Entering the office to be paddled

She transferred from a West coast school to a school in Oklahoma, the summer before her senior year, as a result of her dad getting a new job.  She still remembers sitting in the office as her mom filled out all of the paperwork to enroll her in this high school that seemed so foreign to her.  Her mom smiled a little as she signed one piece of paper in particular and told her daughter that she better be good at this school.  She saw that the paper was labeled “corporal punishment authorization”.  She was honestly confused by what that meant.  She thought that is could mean spanking, but assumed she must be confused.  That night she looked it up on the and realized that it did mean spanking. 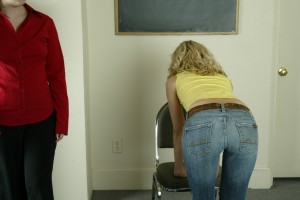 Bending in over in her tight jeans for a school paddling

She asked her mom why she had signed the form and her mom told her “to keep you out of trouble this year”.  She had never been spanked in her life and could not imagine having some teacher give her a hand spanking at school. Te whole idea seemed quite silly to her and she never gave it a second thought.

Less than three months later she found herself in the principal’s office for the second time that year as a result of multiple tardies.  The first time he had been very understanding as she was a new student and he let her off with a warning.  This time he was quite stern with her and made it clear that he was not happy, especially since he had let her off without being punished last time. 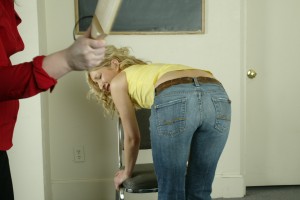 Feeling the sting of the paddle

He stated that the typical punishment for excessive tardies was three “licks”. This caught her off guard as she did not know what a lick was. She asked him and he clarified that it was three swats with a paddle.  Her heart sank as it all started to become more clear to her.  He opened his drawer and showed her a large wooden paddle, so she would know exactly what he was discussing with her. Her mind went right to the form her mom had filled out and she realized that she may be about to be spanked for the 1st time in her life. 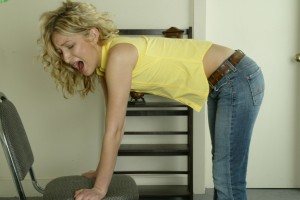 He began to fill out a form and she found the courage to ask “you are going to hit me three times with that”?  He took a moment and clarified that corporal punishment was to be administered by a same sex staff member, so he would not be paddling her.  He informed her that she would be sent to see the female gym coach during lunch and that she would paddle her.  In addition, she would be receiving three strokes for these tardies and an additional three strokes from the previous tardies.  He saw that offense as a “suspended sentence” and since she did not adjust her behavior, she would receive both paddlings.  With that, all she could do was stare at the paddle on the desk and wonder what that was going to feel like.  He gave her the form and told her where to report to at the beginning of her lunch period.  He reminded her to start getting to class on time.

She tried to focus for the next class period but all she could imagine was what was about to happen.  The lunch bell finally rang, and with the form in hand, and dread in her heart, she walked to the coaches office.  She entered the office and the female coach asked for the form.  In a very matter of fact and almost pleasant way, she stated “OK hun, looks like you have six swats coming, let’s do this quick so you have time for lunch”.  While she was scared to death that she was actually having a conversation that involved someone hitting her bottom with a board, this lady that she had never met before, was being quite nice about the whole thing, so maybe it would not be so bad. 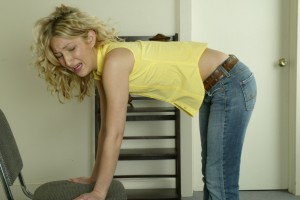 She was instructed to bend over and put her hands on the chair and to not move at all.  The coach then opened a drawer and pulled out a paddle that looked just like the one she had been staring at in the principal’s office.  The coach approached her and once again reminded her that she had “six licks” coming.

She felt the paddle touch her skin tight jeans for a moment, there was a brief pause, and then she heard what sounded like a gunshot go off.  Milliseconds later, the pain from the first swat registered with her brain and she could not believe how much it hurt. She started to stand, but felt the firm touch of the coach pushing her back into position.  She was told “you have to stay still or it will be unsafe”.  The tears began and a moment later the second swat landed on her throbbing bottom.  The tears became full out crying and she begged for the strength to get though four more.  She gripped the chair tight as the next one landed.  She felt the strength being sucked out of her and she wanted to just collapse onto the floor.  The pain was so much more than she could ever have imagined.  Blinded by her tears she suffered through the last three. 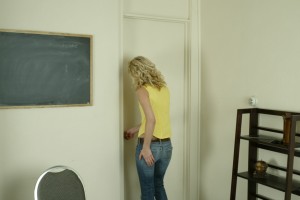 A bruised bottom and a lesson learned at school

As quickly as it had begun, it was over. She dropped to her knees and cried for a moment.   The coach put the paddle away and was still pleasant with her approach.  She helped the young lady up and said “all right hun, we are all done here.  Get yourself to the bathroom, get cleaned up, and get to lunch”.  She punctuated it all with “I am guessing we will not be meeting under these circumstances again, will we”?  The young lady was quite surprised at how easily she found the words that she rarely had used before…”yes Ma’am”.

This story was told using the images from a spanking video in which Sarah is paddled to tears in a school paddling recreation, from the member’s area of Realspankings.com, the most realistic school paddling videos ever filmed.