It is a common occurrence at many schools throughout the South.  Current statistics from the US Department of Education show that on an average school day that 1,944 school paddlings will be administered throughout the states that still use corporal punishment. Over the course of a school day this is 1 paddling every 12 seconds, and the statistics show that about 1/3 of those on the receiving end are females.   So on the average, a female student bends over to receive a paddling around every 30 seconds in the Southern half of the US.

There are many ways in which a high school paddling takes place, but for the young lady in the pictures below, her experience is pretty typical.  She was sent to the principal’s office for an infraction in gym, one that she has been in trouble for before.  The first time it happened it resulted in a warning from the gym coach.  The second time it happened, she was sent to the office and was assigned a few days of after school detention.  In this district, a third violation, can and often does result in corporal punishment.

The female vice principal, who is in charge of all female student disciplinary issues, sentences her to a 10 swat paddling, the maximum allowed in this school district. She has very little tolerance for repeat offenders and believes that if corporal punishment is going to be utilized, that it should be done in a manner that has a strong chance of eliminating all future bad behavior.  This VP has also learned that corporal punishment administered by a male administrator tends to leave a longer lasting impression.  Once the sentence is handed down, the student is asked to go and wait in the room where all corporal punishment is administered. 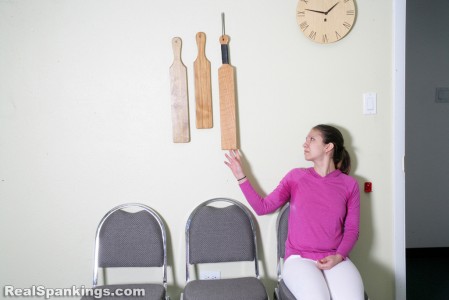 She knows now that this will be far different than the spanking she got from mom.

She waits nervously in the “punishment room” where a selection of paddles is hanging on the wall.  Left alone with only her thoughts and the paddles on the wall, her mind begins to consider the worst.  She has been sent from gym and is still in her leggings, which is pretty much the worst case scenario for a school paddling.  At this point in time she would give just about anything to be back in her tight fitting jeans.  While she was spanked when she was a small child by her parents, it was only with a hand, and the occasional few strokes with a belt.  What she sees hanging in the wall is very foreign to her and her heart begins to race.  She has never once been paddled at school, but like all of the students, she has heard the stories and it never sounded pleasant. 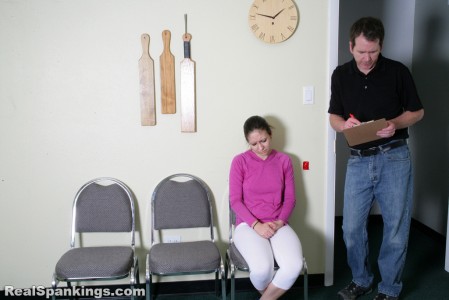 He calmly explains that she is about to receives 10 swats with the paddle.

Her heart races even faster as she hears the sound of someone coming down the stairs to the room she has been waiting in.  He appears from the doorway with a clipboard in his hand and begins a quick discussion with her.  He verifies that the name on the clip board is indeed her.  He calmly and politely asks her if she understands why she is here and the punishment that has been assigned as a result of her behavior.  She is struck by how “matter of fact” his approach is.  While the female VP seemed a little irritated, and her voice was raised on more than one occasion, she is getting none of this from him.  He is not mad at her and he is showing no signs of being bothered by her behavior, he is simply here to perform a function of his duties as a male administrator.  The niceness of his tone helps to relax her a little and she begins to convince herself that it might not be that bad. 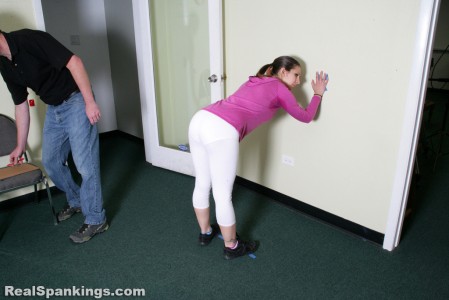 Assuming the position for her corporal punishment.

Her heart rate once again increases as she is asked to stand and he reaches for a paddle on the wall.  He did not grab the biggest paddle, but he also did not grab the smallest.  She is told to place her toes on the blue line that is taped to the floor and to place her hands on the blue x’s that are taped to the wall.  This leaves her outstretched with her bottom perfectly presented for the task at hand.  He gently tells her that it is very important that she keep her hands and feet in place at all times and to do her best not to move.  He explains that with the intensity of the paddle swats she is about to receive, that it could be dangerous for her to move out of position.  He wants to be sure that each swat only hits her bottom, so it would be best if she cooperates throughout the entire process.  This does nothing to calm her nerves as she did not consider that any part of this “process” could be dangerous, and this “intensity” sounds terrifying. 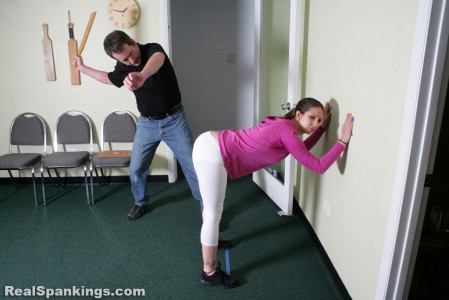 Moments before she feels the first swat…her life is about to change.

A brief moment passes and then she feels the paddle touch her bottom.  Without another word being said, she feels the paddle leave her bottom, and then a deafening sound fills the room.  Her brain processes the sound before the pain, and she is startled for a millisecond before the pain sets in.  Her knees buckle as the full reality of the first swat kicks in.  She tries to let out a little scream but it seems her breath has left her.  She is bent over with her mouth open as the tears begin to fill her eyes.  She knew this would not be easy, but this is a pain like no other that she has ever felt.  Just as she begins to get her breath back the next swat lands…on the very same spot.  With her lungs now filled with air, she makes a sound that is heard from all the way down the hall.  The gentle scream quickly becomes uncontrollable sobbing and the full reality of her situation sets in. 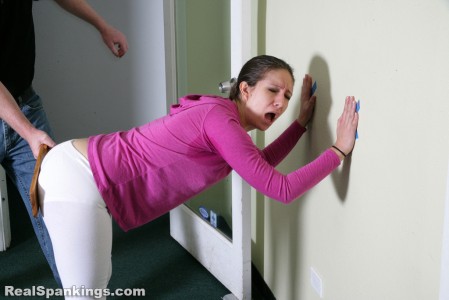 The reality of the situation begins to settle in.

She is being spanked at school, with a large wooden paddle, by someone who really knows how to use it.  No thought is being given to her age or her gender, the only focus is how to apply as much pain as possible to her bottom to help guide her through the rest of her high school experience.  With each swat the promises she is making to herself continue to intensify…she will do anything in her power to make sure that she never, EVER, has to endure this again.  She is experiencing corporal punishment in the exact manner that it was intended.  There is nothing fun, or gentle about any of this.  It is not meant to serve as a warning, she already had one of those, this is intended to punish her for her previous behavior, and punish her in such a way that it will never happen again. 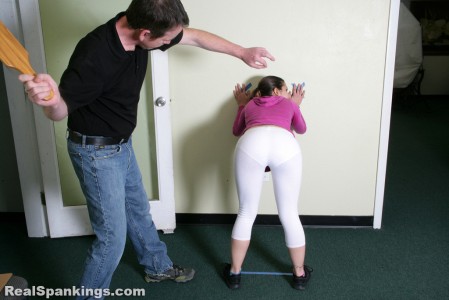 He swings the paddle with a single purpose, to create pain for her bottom.

He does not feel good about what he is doing, nor does he feel bad.  He knows that only through the force of the licks that are being applied to her bottom is there a chance that she will get her act together.  He will not be doing her any favors at all by going easy on her, as easy just puts her back in this same position again, or even worse.  He is able to ignore the cries, the tears, and the eventual full on sobbing because he knows that this experience will be good for her in the long run.  His only focus is each and every swat, being placed on the exact same spot, as hard as he can safely apply them.  He has no hard feelings towards this girl, or bad intentions of any kind, he simply wants to make sure that she receives exactly the punishment that she has earned. 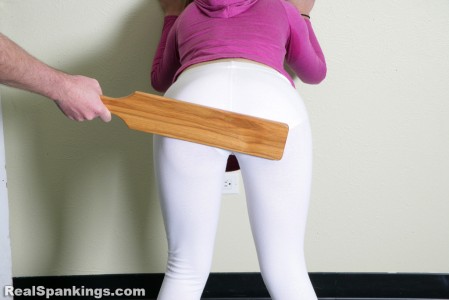 Each and every lick helps with the overall learning process.

As the paddling continues it becomes harder and harder for her to maintain her position.  If it was not for her hands on the wall she would have been knocked forward with every swat.  She works very hard to maintain this position because she just wants it all to be over with and to never have to face such a thing again in her life.  Just after the halfway point she already knows that her behavior in gym will change forever.  Barely able to even see now through her tears, the paddling continues.  She can see the paddle out of the corner of her eye, being raised far above his head, and then it hits so very hard, compressing all of the skin on the lowest part of her bottom and making contact with the muscles of her bottom.  Swat after swat is applied to her bottom until all ten have been perfectly placed.

Hard swats for her teen bottom until a lesson has been learned.

Just as quickly as it all began it is over.  She is asked to have a seat, which is already turning out to be quite difficult for her.  The paddle is hung back on the wall and she is asked to sign her name on the form on his clipboard.  She has to wipe away the tears several times to even see where she is required to sign.  After she signs her name, he thanks her for her cooperation and tells her that she can have a few minutes “to put herself back together” and then she needs to return to gym class.  With that said, the whole ordeal is over.  She stands back up immediately as sitting is not much fun at the moment.  She rubs her bottom gently and feels that it is quite hard to the touch.  Now having a little bit or privacy she quickly pulls down her leggings to have a peek at the results of her paddling.  She is shocked to see that the entire lower portion of her bottom is black and blue.  She knows that changing after gym class is going to be very embarrassing and she is already making plans on how to that privately.  She takes another minute or two to compose herself and then begins the walk back to the gym.  Over the course of the three minute walk she continues to make promises to herself to change her behavior and to do whatever it is that is required to never get paddled at school again.

The is no doubt that she will be feeling this little lesson for quite some time.

All pictures and animations come from the very real, and very intense school paddling video in the member’s area of Realspankings.com